A lot of people think that the only way they will start to have a tick or flea problem is if they have a cat or a dog in or around their home.

However, this isn’t necessarily the case. Tick and fleas are able to attach to humans as they are walking by, and this gives them easy access to your home.

But who are these critters and what do they want? We want to break down some interesting facts about ticks and fleas, as well as reveal some of the potential dangers of having an infestation in or around your home.

Fleas have been around for a very long time, and are very accustomed to pestering both humans and animals. Here are some interesting facts you may not have known about them. 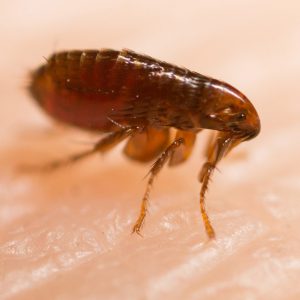 Fleas Are Incredible Jumpers — Fleas are able to jump incredibly far for their size and are able to launch themselves into the air 50 times faster than a space shuttle. Resilin is an extremely elastic substance that fleas have tucked away behind their legs. This gives them the strength to jump the way that they do.

There Is More Than One Type Of Flea — Most people think that there are only one or two types of flea out there, but they are very wrong. There are over 2,000 species of flea, even though there is usually one type that likes to attach themselves to our pets.

Ticks have also been around for a long time, and are just as infamous for being a nuisance. Some interesting facts that you might not have known about ticks are that:

Ticks Don’t Die In The Winter — Winter seems like a safe haven from all pests, but apparently that isn’t the case when it comes to ticks. Ticks are able to survive in freezing temperatures and are still on the hunt during the cold months.

Ticks Have A Favorite Place To Attach — Apparently, the place where ticks attach isn’t random. They are programmed to climb upwards until they reach the skin that’s around our head and ears because it is thinner.

Ticks Are Amazing At Climbing — Most ticks, instead of jumping upwards, will actually climb up trees and then drop down onto their host.

The Dangers Of Flea & Tick Infestations

While there are some interesting facts about these pests, the dangers of infestation are quite real and should be taken seriously.

Both fleas and ticks are able to carry dangerous diseases. Fleas were the carries of the Bubonic Plague and are responsible for more human deaths than all of the combined wars. Ticks are able to carry multiple diseases at one time like Lyme disease and Rocky mountain fever, in addition to the bacteria from all of the wildlife they have been feasting on.

If you have been noticing fleas and ticks in or around your home, we want to help you solve the problem. Contact us today for more information on flea & tick extermination services!