Everyone loves summer, and all of the fun that comes along with it, but unfortunately there is one pest that is determined to ruin the season, and that pest is the mosquito.

It seems like they know just where you are at all times, and know just when to strike. But what do we know about these bloodsuckers other than that they make us itch all summer? Are they friendly? Are they dangerous?

We want to take some time to uncover a few little-known facts and some of the dangers that come along with not dealing with an infestation quickly.

There Are A Lot Of Them — The American Mosquito Control Association has reported that there are over 3,000 different species of mosquito that live today all over the world. If you live in North America, you could easily have encounters with around 150 different species alone.

Only Females Bite — While you might think that every mosquito is out to get you, surprisingly it’s just the females. The reason for this is the makeup of human blood is really important in the development of their eggs.

Mosquitoes Are Weak — In direct comparison to insects like wasps or flies, mosquitos are actually pretty weak. They are extremely slow and can not fly well over long distances. The fastest mosquito flight speeds ever recorded were clocking at about 1 and 1.5 miles per hour, so you should easily be able to outrun one. 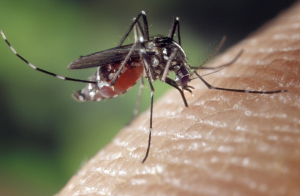 They Love Carbon Dioxide — Mosquitos have a special organ in their body called a maxillary palp that allows them to follow the smell of CO2 that we exhale. No wonder they can track us down so easily.

They Have Itchy Spit — When a female mosquito is hungry and she finds the target that she has been looking for, she will go straight for it and insert her proboscis into the skin of her victim. When she sucks, she will release a small dose of saliva, and this helps her eat better. Humans have a natural immunity to the mosquitos spit, and this will cause us to itch.

The Problem With Mosquitoes

One or two mosquito bites probably don’t seem like that big of a problem, but if they get out of control it can become a potential hazard.

When you think of the world’s most dangerous animal, most people would assume that it’s a snake, shark, tiger or something else with large teeth. Unknowing to most, mosquitos are actually considered to be the most dangerous creature in the entire world.

The reason for this is because of the mosquito’s ability to spread many deadly diseases wherever they are. Diseases like Zika, Dengue, and Malaria. It is reported that mosquitos are the cause of death for an estimated 1 million people per year!

It is important to recognize the dangers of mosquitos and take action against them as soon as possible. If you are dealing with an infestation of mosquitos and don’t know what to do, please don’t hesitate to reach out to us today!