You may have the cleanest house on the block, but that still doesn’t make you immune to coming face to face with spiders. To some, spiders are fascinating, and to others, spiders are terrifying. No matter what side of the fence you currently live on, we want to help uncover a little bit of the mystery that comes along with these little eight-legged creatures, and what kind of dangers you might be facing if you have an infestation in your home.

Spiders Have Poor Eyesight — Some spiders only have 6 eyes, while a majority have 8. Spiders usually use one set of eyes as the main set that is able to create images, while the alternate sets have the job of picking up shadows and light.

Regardless, no matter how many sets of eyes a spider has, they do not have the ability to see things that are a long distance away from them. Interestingly enough, while this is considered a pretty big problem for us human beings, it’s not that big of a deal to spiders.

They spend the majority of their time just waiting and waiting for something to get caught in their net and utilize a kind of silk trip wire as an alarm to let them know if there are any predators coming too close. 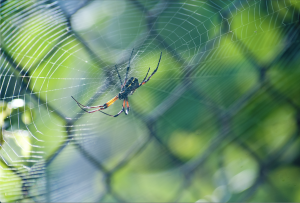 All Spiders Make Silk — Spinning silk is something that all species of spiders have in common. There are around 40,000 different species of spiders, and each one has experience in this area. Spiders’ ability to use silk has grown as they have evolved, and now it is one of their most natural traits.

Unknown to some, spiders are able to produce around 7 different kinds of silk, and each one is used for unique reasons.

Spider Blood Is Blue — After squishing a spider, you probably don’t stop to check the color of its blood. You will be surprised to find that unlike humans, spiders have blue blood.

The reason this happens is that spiders have copper in the molecule that is bound to the oxygen, and this gives off a blue color.

Spiders are pretty crafty and are able to find ways into your home by crawling through a vast variety of natural gaps that are already a part of your house. They can even get through screened doors, windows, and other opened access points.

The truth is, out of the 3000 species of spiders that exist in the United States, only around 60 of those have been discovered to be the cause of dangerous bites. Out of those, there are only two types of spiders that are venomous and pose a serious problem. Those two spiders are the Northern Black Widow, and the Brown Recluse.

For the most part, spiders are only in your home to find warmth and a safe place to sleep, especially in locations with a colder climate. Places that are dark, cramped, moist, warm and around food are the perfect places for spiders to camp out. The best thing to do is not provoke spiders, and they will generally leave you alone.

If you have any serious concerns about spiders infesting your home or have more questions, don’t hesitate to contact us today!